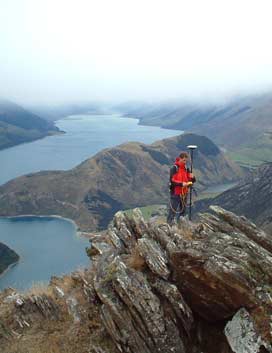 Home » About Our People

Steve joined the Department of Lands and Survey in 1985 and has come through all the changes bringing us up to the present day at TL Survey Services Ltd (TLSS).

As the Managing Director of TLSS, Steve is responsible for the overall team management and official sign-offs required by Land Information NZ and the various local authorities. Steve enjoys client liaision with both exisiting and new clientele.

Steve is an avid golfer and can be found on most weekends at either Gladfield or Te Anau golf courses.

Mark has returned to TL Survey, having worked for the company between 1999 and 2007 before leaving to work in the UK.

There, he worked for several different contracting companies. At one, he was employed as a drainage engineer at a couple of Olympic Games sites – a large park-like recreation area and the Aquatics Centre. At another, Mark helped build railways infrastructure projects such as new stations and viaducts. He was also employed on a short contract at Heathrow Airport.

His role with TLS involves land development engineering and surveying, principally on roads and drainage for new subdivisions. He also carries out resource consent work both locally and further afield in Queenstown and Ashburton.

He coaches junior cricket and rugby, and is in training for the Luxmore Grunt Mountain Run.

Lena has returned to Dunedin from Christchurch where she spent six years gaining experience in predominately engineering and cadastral surveying.

In her spare time Lena can usually be found on Dunedin's walking tracks trying to appear in control of her dog and husband.

Bruce is the third member of the original TL Survey team. He had been both a draughtsman and surveyor at Lands and Survey for many years before completing his New Zealand Certificate in Drafting and the New Zealand Certificate of Land Surveying qualifications at Otago Polytechnic. Stints at the Department of Survey and Land Information, and Terralink followed.

Because of his experience and history with crown work, at TL Survey Bruce is responsible for the crown components of projects. He also works on private subdivisions and general cadastral surveying as well as keeping a watching brief over junior staff.

After spending 80-days working at TL Survey early in 2017 to fulfil the requirements of his university degree, Chris returned to the company in a full-time role after graduation. He now tackles a “good mix” of work, including cadastral boundary surveying and engineering surveying including building set outs.

In addition to being a qualified surveyor, Chris is also a qualified builder and before deciding to go to university was self-employed in the Dunedin building industry.

Chris makes good use of the southern lifestyle by taking his young son skiing and fishing when he can. They enjoy kicking a ball around together and Chris likes to tramp, run and work out at the gym.

Corey Donaldson worked for TLS as an intern over the 2016/17 summer while still at university and so enjoyed his time with us that when he graduated with a BSurv, he returned in a full-time surveying role.

He likes the mix of indoor and outdoor work, and is interested in both the cadastral and engineering aspects of his job. Looking ahead, Corey sees the use of technology in surveying as increasing over time with greater development of computer software technologies.

When not surveying, Corey can be found outdoors – running, fishing or playing sports like rugby.

Carolyn works with sub-division developers designing roads and services, and gaining approvals. She undertakes weekly site inspections, taking measurements and ensuring the actual construction complies with what is on the plans.

Aki has been with the team since 2011 and is the director of first impressions. She mans the front desk, fields calls and is Steve's assistant. Aki maintains the database and handles the accounts. Originally from Japan, Aki worked for a publishing company as a photographer and magazine editor before moving to New Zealand.